Today happens to be my dear Aunt’s birthday.

When I look back, I think I treated her more like my friend than my aunt. She was doing her graduation when I was a toddler. I would pester her to read me stories, take me around, and play with me. She was my go-to person when my parents got angry with me.

I was a fussy eater. She would transform an apple to various dishes from Sambar Rice to Obbattu (a sweet chapathi type dish) to make it appealing and ensure I ate it all!! Hats off to her patience.

I was crazy about bangles. I would demand a new bangles set everybody. In those days, door-to-door bangles seller would come quite often. My Mom had to a strike a deal with that bangles seller to swap the bangles as buying bangles so often for a toddler just didn’t make sense. 🙂 Then, I would go to my Aunt and plead with her to get me bangles from the city and in turn I would buy her bangles when I grow up!!!

Time flew; she got married. My cousin and I wore saree during her wedding (our aunts would struggle to drape school girls with those 6 meters sarees). I was asked to give her respect by calling her Aunty or Chikkamma as she is married now. I obliged 🙂 My Uncle had a watch that would sing songs / play tunes, which was a big deal back in 1980s. We would gather around him and make him play those to us again and again.

I would look forward to their visit to my place. She would always bring me a bangles set or a beads necklace. When I went to her place, she would take me to a nearby fancy store.

She had her babies. People who were aware of my connection with my Aunt would joke around saying she would not remember me that much as she has her own kids now. I just couldn’t agree with them; I would argue saying she will remember and like me no matter what and that I would like her kids too. I became her daughter’s ‘Thai Thai Akka’ (as I would sing her Dr. Rajkumar’s famous song, “Thai Thai Bangaari…” when she was a baby).

I got married and moved on. Our interaction and meetings became limited for obvious reasons. We may not talk to each other everyday or visit often, but I feel the bond we share is forever.

BTW, my aunt has a signature sweet; she makes this yummy burfi type sweet. I love it! 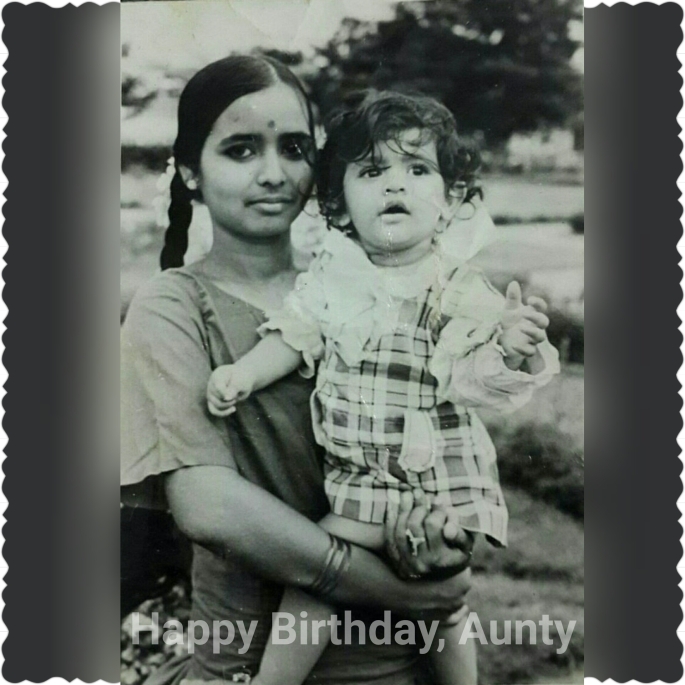